You are here: Home / Blog / Let there be more light, for all

Dedicated to the special lights in my life on this Hanukkah. Spelled any way you like!

Light is essential to life. It illuminates our nights, signifies celebrations and appears in the prayers, décor, traditions and even words of people all over the world. 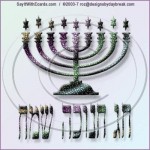 At Chanukah, the Festival of Light, it appears in the form of a Menorah whose eight candles are lit and ideally, displayed on windowsills.

This placement is meant to publicize our freedom to now practice our religion openly and to share our light with all.

Safely in the current year of 5778 for Jews,  Hanukkah commemorates a hard-fought victory over Syrian-Greeks dating back to about 165 BCE (Before Common Era). From the effort to rededicate and purify the great holy Temple in Jerusalem, we got the traditions involving oil. The small quantity of oil for the eternal flame in the sanctuary was just enough for one day, yet it lasted eight miraculous days.

So that’s why we now light candles for 8 nights. One more each night! We enjoy oily foods, have games to remember the youth who played games outside forbidden learning places but were really early warning lookouts, and set aside special family time to eat. play, exchange gifts and even more you can find out about online or in any community near you.

Simple, ah? Not so much.

As my mother used to say, “put three Jews in a room and you’ll get four opinions-at the very least.”

Have you ever noticed how much open debate there is in the Jewish world? About everything?!

It starts with what direction to light the candles. The very great sages named Hillel and Shamai disagreed with whether we should light the Hanukia (the holiday-specific name of the candelabrum) from left to right or from right to left.

Oh, there was also the debate about whether to ADD ONE candle each night or start with ALL EIGHT and countdown.

Hillel the sage’s opinion prevailed. If I recall from my childhood Hebrew classes, it often did. We now start with one and build. We light from the far right position to the left each night. Honestly, I only remember this because it is also the direction Hebrew is written in!

This year I’ll be lighting a Menorah that has my daughter’s Hebrew name still taped on its back. It’s an annual sweet memory of the day she took it to her grade school. The class learned the blessings and songs together and then each one lit their own lights in a blaze of celebration.

From my son, I have kept a little round, hand-formed lump of clay with eight holes in its flattened base. He painted it red. There is a raised spot in the centre for the Shamash, the name of the designated candle used to light the others.

My own kid-crafted effort came at home with my dad.

One year, he told me that when times were tough, menorahs were fashioned from whatever was available. That year we made a menorah just for me to light – from potatoes.

Each night a new round-topped potato end was cut off and placed next to the previous night’s recipient of a candle. Each fresh piece had a hole dug in the top centre, just big enough to fit one of the coloured candles. I got to coordinate my choice from the customary box of 45 lights, enough to last 8 days.

**No potatoes were wasted in the effort as the rest of their bodies went to making fresh holiday latkas (potato pancakes). Miraculously, the potato candle holders lasted eight nights without withering too badly.

The following year, I was older and could handle more serious tools.

We crafted my custom menorah from metal bottle caps. (In those days that’s what we used to pop off the tops of glass bottles by leveraging those  jagged edges with a bottle opener capable of grabbing them). Carefully, I hammered nails into the upturned smooth cap tops along a narrow, rectangular wood board my father got for me.

Now, we had something more permanent. I could decorate! It would also safely catch the dripping from candles that were required by custom to last 30 minutes after being lit.

I was too little to understand that tough times in his case meant war times. First as a very young child in World War 1 (Yep, my dad was that old) and then as an adult jailed in Siberia as a result of his national and religious identity during WW II.

He made do, because traditions were to be kept, and in turn they kept us.

FYI: In the Western, or Gregorian calendar Hanukkah 2017 begins on December 12 and goes to the 20th. In the Hebrew calendar, we are counting on the good year of 5778 but it always begins on the 24th day of the month of Kislev.

I’ll be joining in the lighting of candles outdoors on at least one night, on a giant menorah. In this city full of foundlings transplanted from other regions and often without their families, it’s a welcome new tradition.

In Vancouver, in North America, in fact, the world over, this is a public lighting for all to enjoy and miraculously managed, each year by Chabad-Lubavitch rabbis among other Jewish community organizations announcing the miracle of light.

Already I’ve cheated by having two pretty darn good test latkas I made early. We’ll see if I make more from scratch to share or if I get my fix of oil and annual food cravings at any of the many community gatherings. 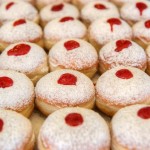 There are sufganiyot (jelly-filled doughnuts, or beignets) and latkas, rugelach (rolled and filled crescent cookies) to be eaten and dreidels to be spun for gambling fun with foil wrapped chocolate money!

Happy Hanukkah and good light to all,