You are here: Home / Blog / Day 24 The people on my StoryMarket street

CBC Radio carried news of the day’s set up of the Wooden Boat Show at Granville Island. My morning wake up gears clicked and it seemed like a good target for some tea at the Blue Parrot overlooking the water. Ideal for a quick scan of the boats before the crowds appeared – that day and all weekend.

When I set out in my new neighbourhood, I zero out the car odometer. It’s now my habit to track distances to nearby destinations so that I can motivate myself to walk to them eventually on another day or even week. 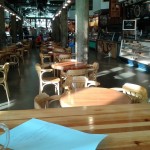 Perched with the Blue Parrot Cafe, behind me

I found a position at a lovely long raised counter. Sleek with wide wooden strips sealed with a Varathane polymer coat,  it seated me in charge of the entire Granville Island food court. I sat on one of a row of round stools perched on only one side along the counter.

Kiosk staff dotting some entry ways as they reported for duty.

One little round table of ladies huddled within their chairs’ wrap around armrests. They had brought along their own cost-cutting and environment saving travel mugs to meet. Regulars, I am sure.

My position allowed a number of super interesting people to approach ‘the bench’ as it is often said in TV courtroom dramas. I’ll share just a few: 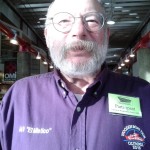 James Poirson of Seattle, owner of El Mystico. The duo won the 2014 Oldest Boat category at the Wooden Boat Festival which he was attending yet again this year along with 45 other floating entries.

On learning that I was a writer adding to my Fab 45 Day writing challenge, he suggested I reread, as he was doing: The Odyssey.  Thank you!

Settling into my 11×17 nautical blue draft sheets, I looked up to see and soon to be introduced to Jared Martin. 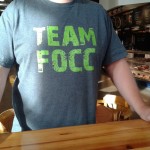 It was his shirt I saw first. The name of his Tough Mudder team. Jared scraped together a team and they went at it, not too long after he recovered from knee surgery. Training happened with discipline around his schedule running his house painting service, Trendz Painting, and being dad to his kids 7 and 8 years old plus a new baby he and his wife welcomed onto their team just 7 months ago.

Somehow procrastination came up and Jared had just the cure for me to read up on: Eat That Frog a set of uber useful lessons, or should I say directives from Brian Tracy.  Thank you, Jared! 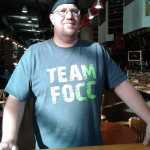 And just as I hopped off my perch, I saw Marina & Franco. Visitors to Vancouver from Venice.

Now that’s a catchy phrase you don’t often get to use!

Having been a step-on-guide in Vancouver for most of my decade here, I saw the ‘curious query’ of a look and asked if they needed some directions or suggestions.

Isn’t it great to guide people you encounter in your neighborhood along..  your streets.. or as in today, along  your nearest waterway? Always something to exchange in the learning at any stage, or age.

From 1971, Sesame Street asked us in song: Who are the people in your neighborhood?

Till next time, catch you just down the street.