Today marks the “official” start of the Vancouver Cherry Blossom Festival which runs for a month from April 5 – 28, 2012. It is a vibrant example of how colour can influence an entire culture and send intangible, yet powerful messages to the senses.

Cherry blossoms have had the city in the pink for more than a week now. I’ve learned to watch for the buds and then full flowers ever since my first spring in this city. I came upon incredible blooms in a lane alongside the domed entry to the Burrard Street SkyTrain station.

Despite many hued pink blossoms bursting open on most of the streets in my neighbourhood, I return annually to this spot. Massive blooms make the boughs arching over the walkway so thick they obscure the sky.

Blossoms bring on the imagining of brides walking under them towards matrimony. Trees stand tall to raise up the blooms like an honour guard standing reading to flash silver ceremonial swords. People walk or sit on park benches right in the heart of the city, finding contemplative rest in this cinematic city setting.

They float onto faces turned skyward as people walk under the pink profusion on the path.

They fall to lie for a moment on suit lapels or catch on edges of briefcases or shopping bags.

The transient flash mob of quiet colour signals spring and hope. In this way it connects us instantly to Sakura Tokyo another famous site for celebrating cherry blossoms – just one factor that connects Vancouver, sitting at one edge of the Pacific Rim to Japan on the other side of the water.

In fact the first 500 cherry trees were gifts from the mayors of both Kobe and Yokohama Japan in the early 1930s. The Park Board planted these, to start at the Japanese cenotaph in Vancouver’s famed Stanley Park to honour Japanese Canadians who served in WWI. 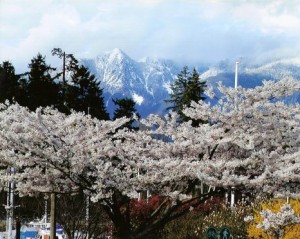 By 1958, 300 more trees were donated by the Japanese consul, Muneo Tanabe, as “an eternal memory of good friendship between our two nations.” Many of those ornamental trees still line Cambie Boulevard, an excellent vantage point from which to view, experience and photograph blossoms. It leads to Queen Elizabeth Park where exquisite blooms can be experienced on walks free for the public to enjoy.

When another 2,500 trees were planted, it added to Vancouver’s push to developing an urban forest in parks and on public boulevards.

VanDusen Gardens, a central location for the Vancouver Cherry Blossom Festival, has chosen the Akebono as the tree of the month for April.  Akebono means daybreak in Japanese and the daybreak cherry (Prunus × yedoensis‘Akebono’) is also Japan’s national flower.

On an interesting note, ‘Akebono’ is an American cultivar that was discovered as a seedling in a California nursery in the 1920s. In Japan, this cultivar is known as ‘Amerika’.

Join a walk at Queen Elizabeth Park in this video by Dingren Tsao (edits) and Martin Fon (photos).